February Superhero of the Month

Superhero of the Month – Sean Andrews

Sean Andrews may only be 11 years old but he is already a Superhero at Mo-Mentum Fitness.  For the last two years he has been training in our Mini-Ninja Warrior Training Program where he has developed impressive super powers including climbing ropes, scaling the peg board, and crawling across the high beam.   His Mini-Ninja training has helped his Autism as well as getting along with his brother. He loves the program so much that he even held his birthday party at Mo-Mentum Fitness so his friends could do Mini-Ninja training with him for an afternoon.

Over the last year, Sean’s leadership skills have developed remarkably. He is one of the most encouraging athletes in the program and is always willing to help out a fellow Ninja. In December he competed in his first SpartanRace and completed a second one in early January.  His goal is to compete on the TV show, “American Ninja Warrior” when he turns eighteen, a goal we totally think is doable.

Why did you join our Mini-Ninja Warrior Training Program? 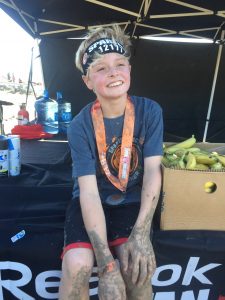 To get stronger so I could be on American Ninja Warrior…I want to do this really bad.  I even train for Ninja Warrior in my back yard so I can get stronger and faster!
How does exercise make you feel?
Like I’m getting stronger every day!
What is the best thing about training in Mini-Ninja Warriors?
I love all of it. Everything is my favorite!
What is a fitness goal for yourself?
To hold a handstand for 5 seconds so I can pass to the next Mini-Ninja level – blue shark.
How does fitness help you in other areas of your life?
Helps me meet new friends and control my autism.
What would you tell a kid thinking of joining Mini-Ninja Warriors?
I would tell them “it is awesome and have fun while you are there”.
What is your favorite healthy snack?
Bell Peppers
What are you most proud of accomplishing?
Finishing two Spartan Races!
Specifics: age? job title? children?  spouse?
I live with my mom and dad and brother Erik. I also have a dog named Sadie and a cat named Snowball.  I attend Circle View Elementary and am a 5th grader!

Drink This Every Day To Lose Weight and Increase Your Energy 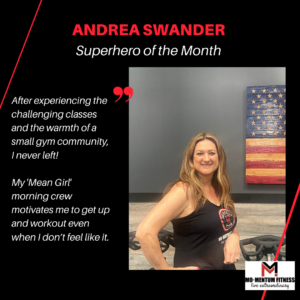 Simply fill out the form below, and follow the prompts to get your Get a complimentary class! VIRTUAL or IN-PERSON Class Pass!